As I prepared myself to write this post, I realized zero of my entries were tagged ‘poverty‘. But it’s clear how this blog has always circled the subject.

Poverty is obviously causing various types of violence, conflict, crime, migration and malnutrition. Playing a pivotal role in a web of factors weaving a vicious downward spiral poverty in turn is also caused by many of these problems. As well as – obviously – by the reduced ecosystem services and agricultural outputs caused by gradual environmental degradation through desertification, drought, reductions in wildlife stocks et cetera, pollution and also more immediate disasters. 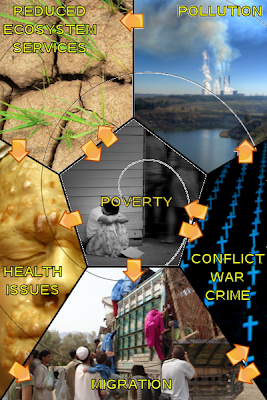 A simplified graphical representation of the “ecowar issues” circling poverty. These issues are connected directly too, not at all just through poverty. Many would argue I left out some orange arrows (go ahead and add your comment). But I have chosen to just include the most obvious connections. Images are Creative Commons by mitch2742, kevindooley, Taras Kalapun, IRRI Images, Goosemountains and Erik Starck.
Putting poverty at the centre of the issues of this blog for a day makes a lot of sense. So far, I have focused on the relatively rare occations when the correlation from nature to war has been particularly strong and causally obvious. But most of the time, the connection goes through several other issues before manifesting.

In this light the Permaculture slogan makes even more sense…

To steward Earth sustainably it is essential to also assure certain levels of equitability. Call it socialism or what ever, it’s necessary. Only a tiny minority of hard-line neo-liberals believes inequality and poverty is necessary. The vast majority of Earths population thinks it’s unfair. And it is also in conflict with ecological sustainability. One pressing danger is for our politicians to buy into the lie that curbing climate change and solving similar environmental issuse is now to be put on hold due to “the financial crisis” (see yesterdays post).

The whole climate change situation is a chapter on causes and effects on it’s own. I’ll leave it for now, but in a system as complex as Earths biosphere any large scale change is bound to cause a crisis somewhere. It is, of course, particularly linked to the above mentioned problems with deforestation and drought as well as industrialized cultures addiction to oil and the resulting disruption of the carbon cycle.

However, in stead of continuing some litany in agony, let us finish by listing some policies to halt this vicious circle around poverty:

And actually, as I tried searching for Ecowar and poverty related news the other day I quickly found stories about a recently agreed deal to try and plant forests to fight both poverty and climate change at the same time. (My first post tagged poverty.) Great. I hope to see a lot more stories like that one in the future!

This post is part of the Blog Action Day 2008