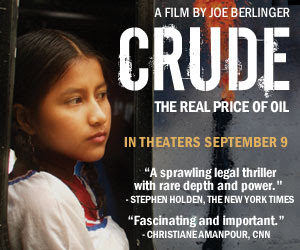 Just saw HOME, still planning to see DIRT and now this, CRUDE. (Haven’t these people heard of lower case letters?) Another 2009 film about environmental exploitation and the hidden costs of it; mostly poor and/or indigenous people abused by Western companies and consumers.

Crude […] will be in the thick of the Oscar fight.

Part of this story was also told in an episode of the tv series Extreme Oil [IMDb].

“Future pandemics are likely to happen more frequently, spread more rapidly, have greater economic impact and kill more people if we are not extremely careful about the possible impacts of the choices we make today” https://gu.com/p/dmbqy/stw