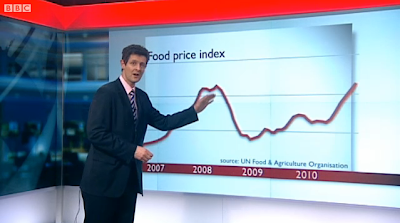 [2:20] “The price of rice – critical for many developing countries – is more stable. One reason, perhaps, why food protests have not been repeated.”

“Rising food prices will have an effect almost all over the world but especially in poor countries where food and energy are the major things people spend their money on. […] There’s a risk, I wouldn’t say a huge risk, but some risk of higher energy prices and higher food prices being very destabilising in some countries.”
– George Magnus, senior economic adviser to UBS

“The cost of wheat, the other staple critical for global food security, is rising, but has not yet surpassed the highs of 2007-08 […] The surge in the FAO food index is principally on the back of rising costs for corn, sugar, vegetable oil and meat, which are less important than rice and wheat for food-insecure countries such as Ethiopia, Bangladesh and Haiti.”
– FAO’s Abdolreza Abbassian

“Three years ago, a large number of poor countries had harvested mediocre crops, forcing governments to tap the global market to bridge the shortfall in domestic production. This pushed up domestic prices and triggered riots. Food aid and agriculture officials say that as long as African and Asian countries do not need to import produce, the impact of rising global prices will remain limited. But a string of bad crops, perhaps because of poor weather, could change that outlook.”
– Maximo Torero of the International Food Policy Research Institute

Update: We were a bit too fast there. According to Reuters / Rioting over food prices subsides in Algeria  a spike in suger and cooking oil prices caused some looting and the Algerian government to suspend taxes on these commodities.