From the depths of my bookmarks (that were all automatically tweeted) on conflict and natural resources, here is a quick review of the way in which Earth was plundered for natural resources in the past year. Year 2014, the 100th anniversary of the first war to run on oil.

Some of the worst news this year was how Islamic State grew out of the chaos in Iraq and Syria, and became known not as the richest terrorist group in the world, but as the poorest terrorist country. Because they successfully occupy and exploit vast oil fields, loot everything lootable while controlling many smuggler’s routes and ruthless dealers. I get how they control the population by mass executions rivaling the worst in history, denying crucial water supplies to villages and other callous misdeeds. But how do they manage to sell oil worth millions of dollars every single day even as all eyes are on the region? Money talks, of course, anywhere and anytime, but still?

Part of the answer came in this fascinating report by Suzan Fraser and Yilmaz Akinci from the border between Turkey and Syria, where… hillbillies, basically… tell how they have always been smuggling. Everyone did it. For generations. So, suddenly a few more bearded men came with a bit more oil than usual. It worked for a time, but Turkish police cracked down on it. Their large scale “pipeline” was smacked into smaller, obscure “pipelines” – like the ones the Islamic terrorists have for every other country, apparently.

Probably more efficient that the Turkish police, however, is the Saudi Arabian financial muscle. To them and most of their allies, the sum of benefits of a low oil price seems to currently triumph the more obvious benefits of a high oil price. Mainly by cutting the cash flow to Iran, Syria, Islamic State, Russia, even North American non-conventional (fossil) energy producers and others. In fact, I’ve seen some speculate Saudi Arabia has almost won the war on Ukraine’s behalf as Russia’s weakening rubles soon cannot pay for any more war. Speaking of Ukraine: This country used to be self-sufficient in coal, but the territory occupied by rebels and Russians just happen to host 66 coal mines, leaving Ukraine’s power plants under-supplied; and the shores off now Russian Crimea just happen to be full of gas. What a coincidence.

That was all just slightly scratching the surface of year 2014 in war for natural resources. On slightly more positive notes, Interpol published a most-wanted list of environmental criminals at large– go get ’em – and Egypt and Ethiopia seems to be agreeing on how to share the Nile. 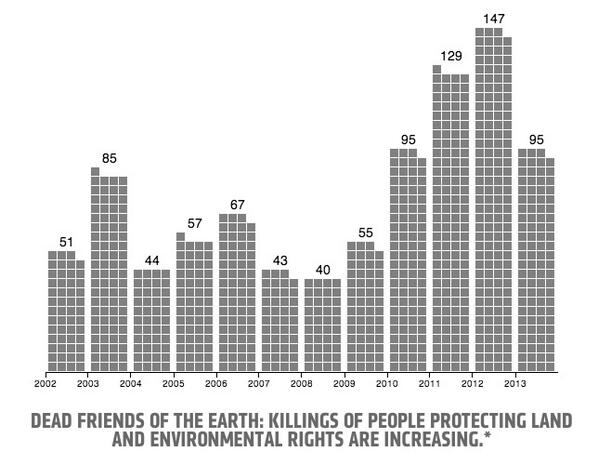 “It’s no longer a question of if climate migration is happening but rather who, how much, where and when ... until now, the focus has been on stopping people from migrating ... the focus needs to be on how to make them an asset rather than a burden for the places they are going.” https://twitter.com/TIME/status/1385481458400301059

Environmental crises are forcing millions into cities. Can countries turn climate migrants into an asset? https://ti.me/3dJ8hFO