As a participant in the TH!NK ABOUT IT Climate Change blogging competition I attended Monday’s European Journalism Center conference in Bella Conference Center (venue of COP15 later this year). Among the speakers were Francois Roudié, Policy Coordinator of the European Commission. Very insightful and surprisingly willing to engage in open debate. One of his presentation slides more or less resembled an extract of my Ecowar Battlefields map (plus possibly a couple of details I need to pick up on!): 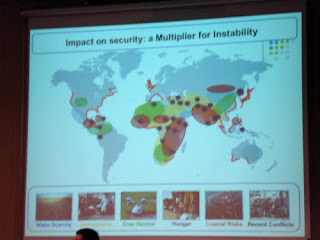 My apologies for the blurry image. From left to right the legend to the map is water scarcity (blue), demography (yellow), crop decline (green), hunger (brown), coastal risks (red lines) and recent conflicts (stars). Point being there is a correlation between areas marked with colours and location of stars.

Asked for a more precise quote Francois Roudié referred to “the Solana report” AKA CLIMATE CHANGE AND INTERNATIONAL SECURITY – Paper from the High Representative and the European Commission to the European Council (PDF) (which he’d been involved in writing). I took note of several media reports on that report when it came out last year: Tuesday, March 11, 2008 / EU assessing climate change security risks.

From the introduction: “The risks posed by climate change are real and its impacts are already taking place. […] Unmitigated climate change beyond 2ºC will lead to unprecedented security scenarios […] Investment in mitigation to avoid such scenarios, as well as ways to adapt to the unavoidable should go hand in hand with addressing the international security threats created by climate change; both should be viewed as part of preventive security policy. […] Climate change is best viewed as a threat multiplier which exacerbates existing trends, tensions and instability. The core challenge is that climate change threatens to overburden states and regions which are already fragile and conflict prone. It is important to recognise that the risks are not just of a humanitarian nature; they also include political and security risks that directly affect European interests.” Chapter two, “THREATS”, first part is particularly interesting (here): Examples of climate change leading to Conflict over resources:

Reduction of arable land, widespread shortage of water, diminishing food and fish stocks, increased flooding and prolonged droughts are already happening in many parts of the world. Climate change will alter rainfall patterns and further reduce available freshwater by as much as 20 to 30% in certain regions. A drop in agricultural productivity will lead to, or worsen, food-insecurity in least developed countries and an unsustainable increase in food prices across the board. Water shortage in particular has the potential to cause civil unrest […] The overall effect is that climate change will fuel existing conflicts over depleting resources, especially where access to those resources is politicised.

The other speakers included Svend Olling, Head of Department of COP15 logistics who made the slightly provocative point that “greening” the conference is only (his) fourth priority – after showcasing energy technology, providing sufficient logistics for a good conference outcome and as first priority: security! (no world leader will be shot in an electric car.) And Mads Christensen, executive director of Greenpeace Nordic who ensured us all protests will be “completely non-violent, peaceful”.

Please consider subscribing to the feed of posts submitted to the climate change blogging “competition”. I have a good feeling about this project.