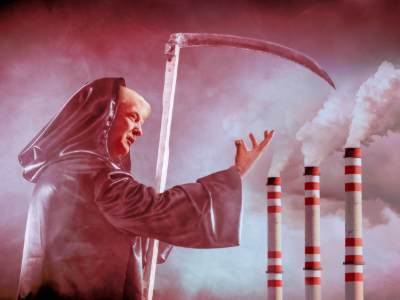 “The Pacific Ocean off Central America remains a blood-soaked environmental crime scene” writes Post Magazine in a sad report on illegal shark fishing by Chinese fleets. In one case, the Ecuadorean navy caught a Chinese freighter carrying 150 tonnes of dead shark. In China, the price of shark fins are sometimes higher than the price of heroin.

Rest in Peace, John McCain. You were an old school Reblican. The real kind of republican to whom a certain strain of environmentalism is entirely natural, writes EcoWatch.

If one country invades another to get to its oil fields or a rebel group occupies a mine to plunder the minerals from it, the violence done in the process is subjective. But the world is full of objective violence as well, says philosopher Slavoj Žižek. So, when people die in environmental disasters that are directly linked to climate change which is again linked to our civilization’s very basic structure… how is this not violence? Like in the case of the 400 dead in Kerala last week. Or when the Trump administration authors a climate policy in which the increased air pollution alone is expected to cause 1,400 premature deaths in the US annually. Long time readers of ECOWAR will know objective violence has always been covered here.