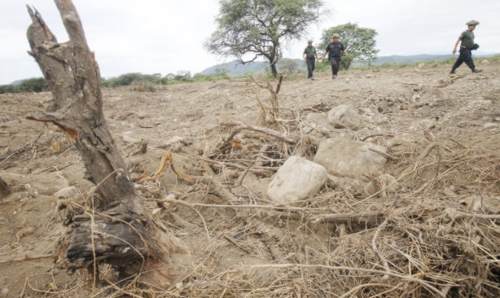 How often do you despair that so little action is taken even in the face of mounting signs of trouble to come? It “takes dead bodies on the table”, a saying in Danish goes. And this summer’s Californian wildfires at least led to that Democrat led US state’s pledge to transform to 100% renewable energy.

Invaders are burning, logging and illegally cultivating areas of the Chaparrí ecological reserve in Peru. After the murder of their mayor, locals are forming vigilante groups to protect the biodiverse forest they live in.

“During all the years I’ve lived here, the situation has never been this threatening. The murder of the lieutenant governor in this hamlet made us organise in order to protect ourselves.”

“Instead of being defended, the national park management unit closest to the centre of provincial government in Palangkaraya – which, in theory, should be able to protect its integrity – is in reality allowing encroachment, leading to the destruction of tropical peat swamp forest.”

In Africa, as Kenya has effectively clamped down on elephant poaching while other countries have had their elephant population decline, ivory crooks are moving to South Africa, reports Business Day.

Peter Gleick of the Pacific Institute in Oakland, California was awarded the 2018 Carl Sagan Prize for Science Popularization. About half of what I have ever written about water conflict, in one way or another I owe to him because so much of it ultimately comes from his project. Follow him on Twitter.